This Sunday we wanted to continue with the wealth creator series or wanted to write about the power of compounding. As I was wondering what to choose and glancing through the news paper, then appeared this article. This one piece is a serious read for all the aspiring readers. We read and this inspired us a lot. This article depicts what myself and Sarav think every now and then. So, we are sharing certain important points for those who have the FIRE to save more, FIRE to invest more, FIRE to be financially independent asap. If you have the FIRE,  then read ahead.

Before they got married in 2014, Naren spoke to his bride-to-be Sugandha about an idea that had been close to his heart for years: saving and investing enough to be able to escape the rat race as soon as possible. Sugandha, who worked at a Gurgaon startup and was used to splurging, took some time to see his point of view. Eventually, the couple began their married life by working for a goal many only dream of — retiring at 45. 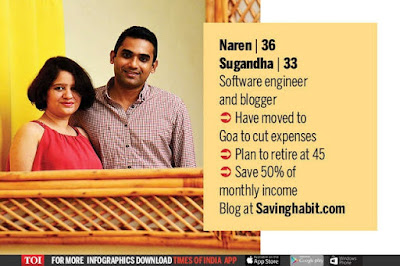 “When you become financially independent by 45, you can make bold life choices like changing careers, starting a business, working fewer hours for a healthier work-life balance or, simply taking a break for a few years,” says Naren, 36, who tracks his progress on his blog Saving Habit and wants to work in a non-profit post retirement.

Naren and Sugandha are part of a small tribe of Indians inspired by an online movement called FIRE — an acronym for Financial Independence, Retire Early. There is even a FIRE India forum on Reddit to exchange tips on personal finance. Many follow the blog, Mr Money Moustache run by an American Peter Adeney, for guidance. He and his wife retired at 30 by saving upwards of 70% of their income each year. And yes, they managed this without winning the lottery or banking on an inheritance.

For Indians, early retirement is more difficult. In a 2017 global retirement index of 43 countries which took into account factors like saving avenues, healthcare etc, India ranked the lowest. But many millennials are still FIREd up. For some, especially IT professionals, it is a way of coping with the fear of layoffs in the time of new technologies, and seeing their incomes stagnate as they reach middle management. Naren’s own difficulties in finding a job after graduation and later working as a techie in the US made the idea even more appealing. “Our parents’ generation expected to have job security till 60 and then retire with a pension,” Naren says. “We expect neither.” While real estate was his parents’ biggest investment, Naren’s generation prioritises personal freedom and career mobility, and focuses on inflation-beating investments and liquid assets.

Financial planner Surya Bhatia says early retirement was never a primary objective like it is now. “People strive and work towards financial independence, and even go the extra mile to save,” he says.

For others, it spells escape from the corporate grind. Delhi-based online marketing professional Ankit Garg wants to hang up his boots early because he wants to spend more time with his son. “Our generation values their time more than anything else,” says Garg, 34, who runs the blog 60to45. “Today’s jobs are more strenuous, and people burn out sooner.” 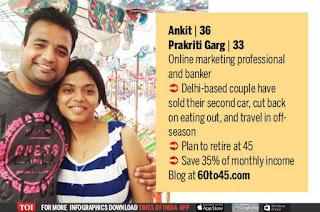 Hyderabad’s Rajshekhar Roy, who was 49 when he retired from corporate life in 2014, says many people also opt out when they realise there are limited chances of moving up the professional ladder. “Only a few people become CEOs,” says Roy, who himself retired as a CEO to pursue other interests like travelling, training others and sports. Today, he spends half his time working as a consultant and taking workshops. “Many think ‘I’ll travel at 60’, but I believe that is too late an age to do something new,” he says.

Of course, retirement doesn’t necessarily mean you stop working completely. “My idea of FIRE is to have enough money to have an option of not working ever again but not the obligation,” says Lucknow-based investment adviser Dev Ashish, 33, who has helped several of his clients become financially independent.

In the meantime, Naren and Sugandha are working towards their goal. They moved to Goa as it’s quieter and has lower living costs than the metros. They don’t dine out more than once a week, buying gadgets only when they stop working. Instead of buying a house on EMI, they saved up to purchse one as an investment and currently live on rent. They use cash instead of a credit card, and take only domestic holidays. “Rewiring our instant-gratification spending habits towards delayed gratification took effort initially,” says Naren, who has saved 34% of his target. “We are able to cut down our expenses just by buying what is needed and not wasting what we already have.”

Naren and others are aware of the challenges unique to India. “While inflation rates in the US are 3-4%, actual inflation in India is close to 8-10%,” says Pattabiraman M, an IIT-Madras professor, who runs the popular blog Freefincal. “The biggest challenge is having enough to handle inflation.” Also, unexpected expenses such as a medical emergency may disturb your plans. “Life’s googlies can be difficult. When you’re young, you think you can wing it, but not when you’re 45,” Pattabiraman says. “Even if you have enough money, it is better to have a reasonable source of side income so you can choose when to work and how to work.”

For Garg, the key is to first invest and then spend. “Usually, people take care of monthly expenses and then save the rest. I flip this,” says Garg, who creates his personal budget for the year in January. “As your income increases, it is your saving rates rather than your expenses which should go up.” This has meant selling his second car, buying a phone under Rs 10,000, travelling only in the off-season, and minimizing eating out despite being a foodie. 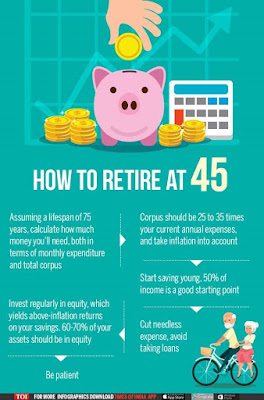 Yet, the pressure to keep up with the Joneses can make it hard to stay focused. “In my friends’ circle, everyone’s kids wear branded clothes, but I will use that money for my son’s education,” Garg says. “Everyone wants to retire early but not everyone wants to go through the journey,” he adds more philosophically. Source – Sunday times.

The reason why we shared this today is, whenever people approach us for financial planning, we advice them to start investing early and stay long to reap better benefits. But then, the first question that comes up from them is, why should I wait for a long time and why should I save for the later part of my life, why should I, why should I and the why should I continues. Hope this article gives a better answer for all the “Why should I” questions 😀.
Reach to us for planning your financials.